Office for Mac SP2 just came out. The new update brings a horde of corrections and improvements.
As always, I’m sure people will notice a few new problems here and there, and I just found one such change that prove problematic for some.
In the process of updating your installation of Office to the latest and greatest, the updater moves some folder to a new location. Most files and folders previously in ~/Library/Preferences/Microsoft and in the ~/Documents/Microsoft User Data/ folder are now migrated to ~/Library/Application Support/Microsoft/Office/.
That includes the various Script Menu Items folder, the templates for Word Excel and Powerpoint, and the Preference folder for Office that previously was in ~/Library/Preferences (and that often contained the custom dictionaries).

In a sense, I welcome the move. That’s the recommended location for these items for Mac OS X, but there is one problem:
The folders that are relocated there are re-created, not moved.
This essentially means that AppleScripts placed in the Script Menu Items folders for instance, will no longer show up in the Script menu in their respective applications.
You have to move all your custom scripts, files and templates from the previous default location in ~/Documents/Microsoft User Data/ to the new one in ~/Library/Application Support/Microsoft/Office/.
The ~/Library/ folder being invisible in the Finder in Lion, you might have to use Command-Shift-g in the Finder to trigger the Go To Folder window (where you can enter this path to see the content you need).
You can also use the Script menu in any of the Office applications to select About This Menu… and then click on the Open folder button. 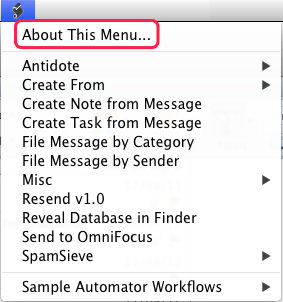 After correcting these little issues, I cleaned-up my MUD to eliminate useless duplications and it now looks like this:

As you can see, user data remains in the MUD folder. I wished they actually had moved these files to a location under ~/Library too, where people are less likely to mess with it, but that’s a different story…
You might also find data folders for various other Microsoft products like Messenger and Lync (or Communicator).

Of note: If you use the Excellent SpamSieve in Outlook, and move the SpamSieve scripts, make sure you edit your Rules to point to the new location.

By default, SpamSieve still installs the scripts in the old location, but the author is usually really responsive and I’m sure future versions will correct that.